An apocalyptic cozy adventure about wandering an an abandoned arcology and helping the dead pass on to destroy an ancient evil preventing your escape.

For the portable version, check out Ghost Helper: Pocket Mall

Ghost Helper is about Vertov & Acavica, a robot and their alien partner, who set off to uncover the ruins of a lost earth civilization, hoping to find items to sell to collectors or donate to information archives. Upon entering Earth's atmosphere, the scavengers' ship collides with falling space junk, causing the ship to crash. In a toxic, uncharted sector. Vertov sets out to look for parts to use in repairs, while Acavica stays behind to work on the ship.

While scouring the strange, uncharted wasteland, Vertovis caught in a sinkhole & falls into a tunnel. Unable to send a message to their partner, they venture farther into the tunnel until they discover a dimly-lit staircase, leading to possible freedom.

Instead, they find themselves in a building. In a hallway. A door leads them into another area. A mall, seemingly frozen in time. Their way forward is blocked by a mysterious fog that corrodes their joints and burns their circuits. Then they see the ghosts.

One of those ghosts excitedly asks if they've seen a movie...

The basic premise of Ghost Helper is exploring the Neighborhood Center Mall, a massive arcology-like structure where people once lived, worked, and shopped., located at the heart of a company town. Now those people exist as ghosts trapped in the building. Along the way you complete side quests given to you by the ghosts in order to help them pass on. As you free ghosts, you gain access to more of the mall until you finally are able to escape and return to your partner and the ship.

This game is a work-in-progress and an ongoing project. A majority of what you'll see here is a devlog hopefully logging my progress with this dang thing. 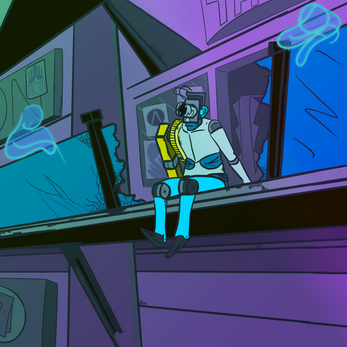